If you are on holiday in our city or would like to come and visit us, surely you cannot miss the squares in your city tourist itinerary, which are the beating heart of a city. The squares serve as gathering and meeting places, but above all they are witnesses of country stories, stories of everyday life. This is where the local dialects are mostly spoken. This is where the atmosphere of a city is breathed. They are not just passageways between one street and another, but they are real city theaters, where the country takes shape and we all act as actors and extras.

There is a beautiful phrase by the writer Beppe Severgnini that explains exactly the essence of the squares: “To understand the squares you need to attend them. And to attend them, you don’t have to hurry. The squares tell, in fact, but you have to give them time to talk. ”

So, if you are in Trani, we advise you to go to the main squares of our city, listed below, to walk around, but above all to “listen” to them and “experience” the reality of Trani. 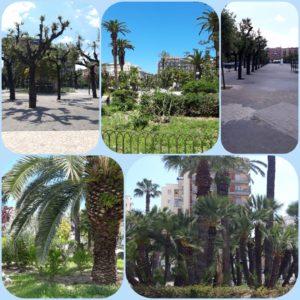 It is the central square of the city. It consists of two large rectangular open spaces: one of the two houses two fountains and several benches on which to sit and chat in the shade of many trees that fill the square. Here, too, is the bronze statue dedicated to Giovanni Bovio, a famous Italian philosopher born in our city.

In the other clearing, instead, in addition to the trees that surround the perimeter, the central part occasionally hosts flea markets or events. It serves as a meeting place for young and old, thanks also to the many bars and clubs that surround it.

Almost triangular in shape, it is one of the most “haunted” squares in the city. It acts as a watershed between Via Mario Pagano and Via Ognisanti and is located opposite the Municipal Library named after Giovanni Bovio, and the beautiful church of San Francesco consecrated in 1184.

Its name is linked to the revolutionary movements of 1799, and before they demolished the walls and then created the Piazza della Repubblica, this square was the living room of the city until the 1800s.

Architecturally it consists of a central fountain, surrounded in turn by a pair of benches. Here, there is also a tall stone monument in honor of the Immaculate Virgin.

Moreover, during the Christmas period, in this square is set up a beautiful temporary crib, different every year, as a tribute to citizenship. 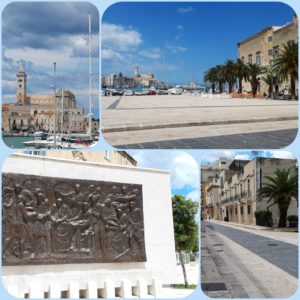 Named after Gaetano Quercia, lawyer and intellectual from Trani, it is one of our largest and most visited squares. It has no benches, but is no less animated than others. Overlooking the harbor, it offers a panorama of great charm. It is surrounded by bars and cafés where you can stop for a breakfast or aperitif, and from nineteenth-century buildings that were once home to wealthy Tranesi families. Here in 1963 a monument dedicated to the Maritime Statutes or Ordinamenta Maris was erected.

In this square, moreover, popular events and shows are held. In the past it has hosted various concerts of famous singers and between 1955 and 1959 it hosted the Festival of the Italian Song of Trani, a real prestigious event almost at the level of the Sanremo Festival. 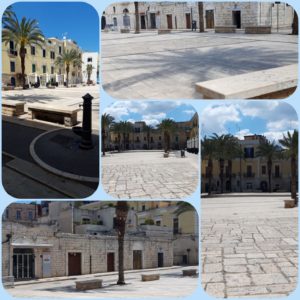 Another popular square is Piazza Teatro, so called because the city theater was built on it.

Built in the late 1700s it was designed inspired by the San Carlo of Naples, so much so that it resulted in a reduced-scale copy of the most Neapolitan theater.

Unfortunately it was demolished in the second half of the 1900s, after having been damaged following a bombing in the Second World War. In the early 2000s it was redeveloped creating another meeting point for the Trani movida. 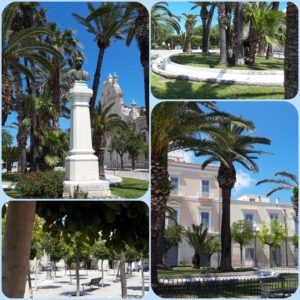 It is the square in front of the Villa Comunale. It consists of a large open space that houses a large flowerbed at the center rich in very high palms, surrounded in turn by benches. A little further on, beyond the road, there is another space, a plane of trees and benches. During the local festivals and especially during the patronal feast of St. Nicholas Pellegrino, it fills with stalls selling ethnic and confectionery products. 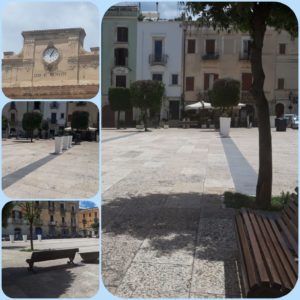 In the past this square was also called “Piazza del pesce”, because it housed the fish market. Today, it is a large open space where you can walk and stop to chat while sitting on the benches. “Silent” by day, in the evening it is alive with music and young people thanks to the recently opened clubs. 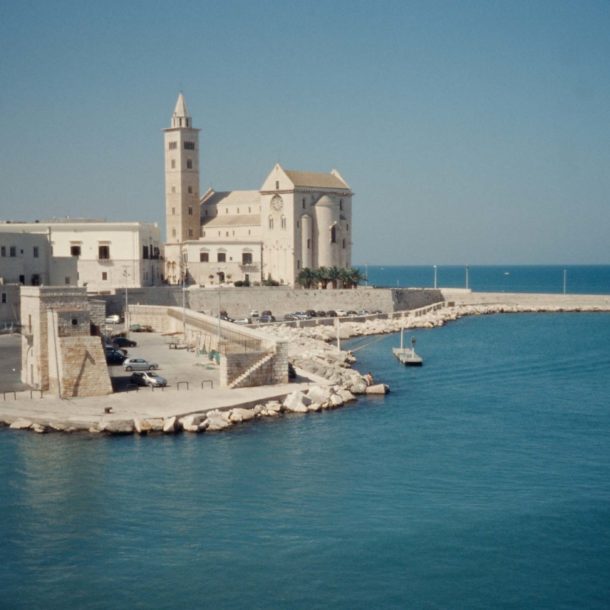 Trani: the architecture that looks at the sea
Previous Article
© Copyright Residence Trani 2019